World Domination is on Hiatus

It was always going to be a problem hiring an infinite number of monkeys and chaining them to an infinite number of typewriters, just to translate Sam Pope into all of the world's numerous and exotic languages. So in the end I decided to stick with English, and the monkeys found gainful employment writing Razorlight's new album.

Therefore, the plan for world domination has been downgraded to getting the books on sale somewhere outside of Newcastle, there was a minor victory with Pope 1 on sale in Deadhead Comics, Edinburgh, but nothing too dramatic since then.

Sam Pope 3 came out on Thursday, and I was having a chat with Jamie about this troublesome business of small press comics. It turns out, Travelling Man are up for getting indie comics out of the shelter of their local branches and into the big wide world. I, too, am up far this crazy venture. Unterwelt Comics will be nationwide as soon as I can be bothered to go back to the photocopy place. Incidentally, I found out Oxfam stopped doing the cheapest copies anywhere in Christendom a couple of weeks ago. The newsagent around the corner do copies for a penny extra, but the quality is much higher. Swings and roundabouts...

Anyway, I just want to take this opportunity to say thanks to Jamie and the guys for supporting some kid who thinks that making comics books is a valid use of my free time.

And while I'm feeling generous, here's that tale of debauchery Chris and I bore witness to, way back at the end of August. I don't want to milk it, but as far as 'quick, one-page strips' go, this was a right pain to complete. All of the backgrounds are public domain images, and I'm not using this for anything other that the web, so there you go. Everything's above board. 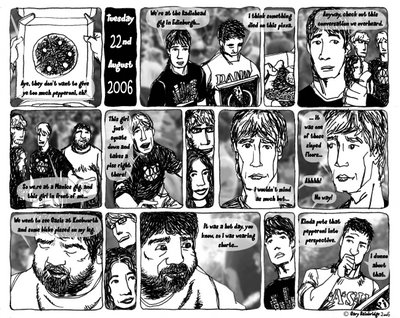 Thanks for the comic 'short', I had consigned that pizza to the 'dust bin of history', (a quote from Leon, for all you Trotskyites out there) but you had to dredge it up! never mind it's a cool piece so i forgive you.

Can't wait to get my hands on Sam Pope 3 and see if this conundrum wrapped in an enigma oven baked in incomprehensibility, answers any questions.