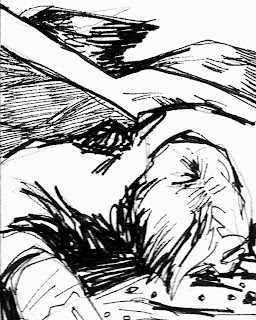 Work began in ernest on Pope 5 yesterday. I'm about three pages in. I need to be done by next week I think to stay on track for a July/August release. Usually a break from Pope does me loads of good, and I come back to it with fresh eyes and, hopefully, a better comic. But at what was always intended to be the halfway point, I just feel a bit bogged down. perhaps a redraft is in order.

Hmmm... Enough of this self pity, I sent some Pope #2s down to Orbital yesterday as well, and sent out some stuff to an anthology. More on that later. I'm starting to think anthologies are the way forward. They certainly make for a mix of exciting work that you can dip in and out of. Maybe I'll do one when Pope ends. As a celebration. This year I really need to get a minimum of three more issues of Pope done. That takes us to seven. Then it's the final stretch to number ten, then it gets exciting.

Then Nightbus is coming.
Posted by Gary at 11:07