So it's been pretty lean on the old art front of late, doing as I have about 12 panels worth of work in 3 months. Nightbus is looking at a Jan/Feb release date, and we've already had much in the way of encouragement, enthusiasm and abuse from the fanbase.

In terms of stuff that I have done, every fortnight, we get together for the Newcastle Comics Forum, and of occasion, break out the pens and the stopwatch, and do a 24 Minute Comic. If anyone thinks that sounds familiar, but just can't place it, go here. I'll be waiting.

Gareth Brookes suggested doing a 24 Second Comic. He's mad as a chip, I'd never find the time for it...

Our version demands two words chosen at random in order to get the creative juices stifled, this week, it was ASBO and Sponge, and here is the comic... 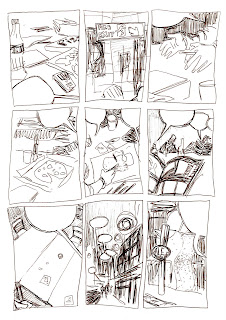 I also did a guest strip on Steve Tillotson's rather lovely Banal Pig Funnies blog. I now hold the provisional title of second best guest strip after the formidable Oliver East.

And finally, Cai Nyahoe is an artist, bon vivant and one man opera star. Now he has a blog.

Have a splendid Christmas.
Posted by Gary at 20:25