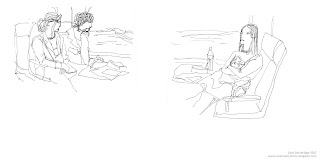 We'll kick off the first post of the year with some nostaglia. About this time last year I was in Germania, and talk of holiday preparation this year had led to a request for this drawing to be pasted up on the shabby corner of the internet that I lay claim to.

I had to edit Amy out of this because she has to approve every drawing I do of her, and she's at work now. Then that's Amy H on the left, Michael and Alison. I did it over two pages which is why there's a big gap in the middle.

Of the new year's resolutions that involve comics and the blog, there are only two, namely, to blog more, at least once a week with pictures and that, the requests thing is part of that. Secondly, go to at least one comics convention/get together/gathering/goat sacrifice/whatever the kids are calling them these days. By virtue of it being the most appropriate and the soonest, we may be having a jaunt down to London Village for the UK Web and Mini Comics Thing 2008, or, as it's more aptly named Thing.

...Well, that is if Chris e-mails me back before the exhibitor tables fill up.

And the pimp this week, or something, is for my fellow 19th century explorer and leftist agitator, Mr Matthew Briggs. He's got some rather contentious and well crafted tirades over at his new site. Get offended and leave a comment.