I've done a drawing and it's quite good... 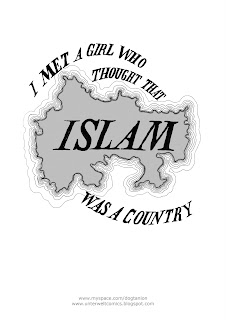 Paul O'connell is the chap behind the comic Sound of Drowning and its sister publication, "He Bought me a Soda and Tried to Molest me in a Parking Lot" which is an anthology of illustrations inspired by song lyrics you can't get out of your head.

And lo, Paul asked me to submit something for the second anthology, affectionately shortened to "Soda 2", and Matt's band Dogtanion are on the verge of recording more songs which will no doubt be dead good and that.

Go to the myspace, listen to the song, it's called Islam, by the way, make friends. It's what people do these days, in lieu of human interaction.

In other news, if you haven't already, why not join the Nightbus Group on that Facebook?

There'll be more updates when I get sorted with Paypal for the comic. It's on sale in all the Travelling Mans, as well as David's in Brighton, and I'll sort out the rest of the world at some point next week. Honest.