Oooh! Preview And That 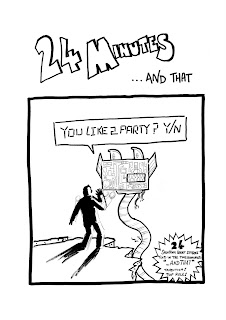 So I've finished scanning the dog eared originals for ...And That volume 3, we just need to nip down to the printers now. Well, maybe later, is the weekend good for any of you?

This is the cover, it's a collaborative effort by some, all or none of the contributors, and is quite a striking image, bearing the cruel rules we force upon the means of production.

Nightbus #2 is at the inking stage, so we'll hopefully have that out sooner than you can evolve or something. I'll post a few images up in between the shifts.

Nightbus #1 is in that grey area between needing a second print run and not having the cash to finance that and the second one. Hopefully the shops round the country will have sold out and given us money by the time number two is done, so there can be the possibility of having two issues side by side, which scientists have found, has a positive effect on sales.

If you fancy a copy of Nightbus, and you're nowhere near any of the Travelling Mans (Newcastle, Leeds, York, Manchester), David's in Brighton, The Forest Cafe in Edinburgh or OK Comics in Leeds, drop us an e-mail at nightbuscomic@hotmail.co.uk and we'll figure out something beneficial to all parties.