I Thought, Therefore I Was 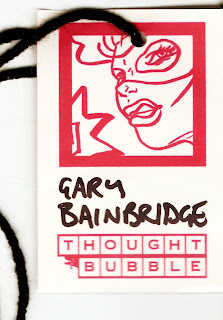 Greetings, the team is back from Thought Bubble, that team consisting of myself, Mr Jones, Captain Jack Fallows and Siobhan, his long-suffering ladyfriend. We were on an annexe of the Travelling Man table dedicated to our small press wonders and all went highly well. Not from a sales point of view, however. The event caters for a much more broad clientele than previous small press fair we've been to. This is very much a sci-fi, and mainstream comics gig, with a much smaller percentage of the punters interested in what we were offering. That said, things picked up and our 'flagship' titles of Nightbus #02, Objet Perdu and Jack's latest offering, Costume Party and crowd pleaser, Gentleman Ghost started selling like reasonably warm cakes. 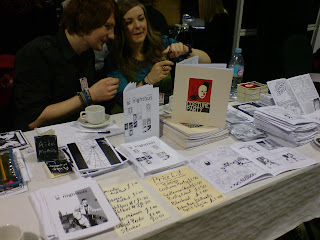 It's not about the money, as we told ourselves as we tucked into tecso's least finest sandwiches for lunch, and we had the chance to catch up with some mates, acquaintances, and new people, including, in no particular order, the Banal Pig boys, Oliver East, Adam Cadwell, The Polaroid Press, the Mallard gents, Newthink Books and Tom Cassady, formerly of Outline. Big shout out to all a y'all. Word. Etc. 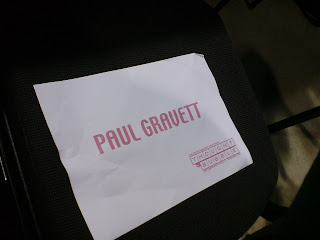 I also had the pleasure of shaking the hand of sequential art advocate Paul Gravett. The nature of the event being more mainsteam meant that there were a number of comics' heavy hitteres doing talks and signings, and of course, the conversations about never wanting to meet your heroes. In a way, Paul Gravett fits that bill for me, making a career through writing criticism, theory and history about comics, alongside an almost encyclopaedic knowledge of the medium. Imagine the scene, dear reader, when the man himself comes over to our rickety little table and only starts flicking through Nightbus, pointing out the very things I've laboured over and that a lot of people miss. Anyway, Mr Gravett offered to take some copies of Nightbus, Gentleman Ghost and Costume Party to the Comica Comiket event on Saturday 22nd November. Please, follow the links, I'll wait here.

I also had the pleasure of meeting C.B. Cebulski from Marvel, who, after he finishes reading the comics I thrust into his hands, will be on the blower in no time.

To sum up, Thought Bubble was possibly one of the most enjoyable comics fairs I've been to. Lots of splendid people to talk to, several cups of tea and a healthy compliment of doppelgangers. We'll see you next year. 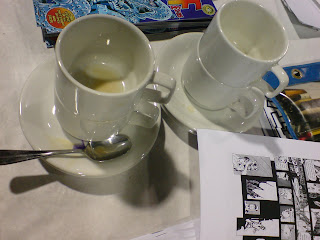 Thanks for the shout for The Polaroid Press there!
Read Nightbus 1+2 on the way home, good stuff guys.
Hopefully catch you soon...

Cheers, Matt. Your stuff also made the train ride home a much more pleasant experience.

Argh, I never came back and picked up Nightbus! Next time, Bainbridge, next time! Thanks for the link too.

No problem. I'm sure you'll get looooads of traffic from this lowly Internet backwater.

If you really want a couple of Nightbuses, I sent number two down to Travelling Man Manchester recently.

Oh, and I was proper loving the bootcut jeans bit in the Everyday. Kudos, sir!