Last week saw a number of events in the small press calendar. The Launch Party for "You will have to Wait... And That" was a rip-roaring success. We had a story specially written for the night, by Mark Pembrey, and the music provided by Echo Ave and the Stillwells was top notch. The small press table was positioned right up next to the bands and translated into a shedload of sales. 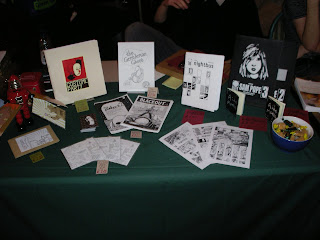 The weekend took myself, Jack Fallows and Mallard Small Press, north of the border for the second small press fair at the Forest Cafe in Edinburgh. There's a photo of the table. Because obviously, you've never seen me post anything like that before. Last year's event was really good. Honestly, it wasn't the most well organised, but it had a charm, a fair few decent artists and a refreshingly open atmosphere.
This year's was a huge disappointment. We were in the tiny cafe itself rather than the event-friendly hall upstairs. Essentially feeling in the way and unwelcome. I don;t want to go on and on about the negatives, more articulate folk have done that elsewhere.
But, the lack of involvement from the original organisers meant that the event felt like it was fumbling around in the dark. As a way of recompense, every North East comics creator is now duty bound to join us in hosting a small press fair in Newcastle.
Comics creators of the world, unite! 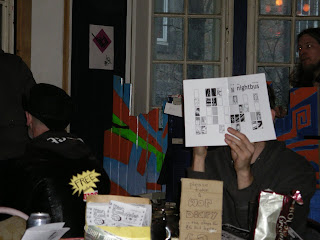 Sorry to hear about Ed. This certainly adds weight to the call for a Newcastle Small Press event?

I'm well up for a Newcastle event.

Give it 5 or 6 years and I might actually have something else to sell besides Melanchomic!

Aye, we've been thinking about it for so long, and now it's time to do something about it.

Andy, I think it'd be hilarious if you had a massive table with just the one comic on. I only had two comics on sale at Ed. next to Fallows' annoyingly extensive back catalogue.