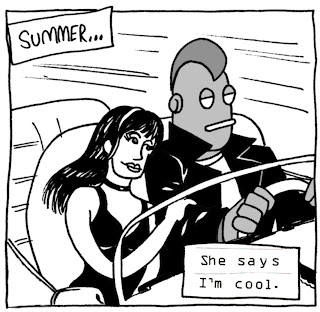 There won't really be any order to this, so bear with me. Nightbus #01 is back in stock! Go down to the shop and get your good selves a copy now. Or soon. Put don't put it off too much. Carpe that diem.
The fifth anthology from Paper Jam Comics is called Robots... and that. It's so good it will make you break down and weep like a child. The launch party was fantastic, a new venue, the Star and Shadow Cinema afforded us the opportunity to show films and cram a load more people in than on previous occasions. There were new bands, well, different bands, and a new name for Jack's band. Daniel is the frontman for Squares who headlined the event, and we collaborated on a wee comic for Robots... which is previewed above. Previewed is a bit inappropriate, as the whole anthology has already been viewed by folk for about a week now. Daniel is a very talented writer and you should read his blog which also has a few entries on our creative process.
I urge you, if you haven't already, to go to the Squares myspace or facebook and befriend them. Whatever that means. Stalk them, that will be a far more constructive use of your time.
Hmmm... lots of links there. Speaking of which I've updated the links bit at the sidebar. Do enjoy yourself. I'll be back when I think of more stuff to write.
Posted by Gary at 17:39

It's like me and thee are just having complement tennis over the net. Thnak you, kind sir.