I did a little write up for the Paper Jam Comics Collective on events of seven days ago, and here it be... 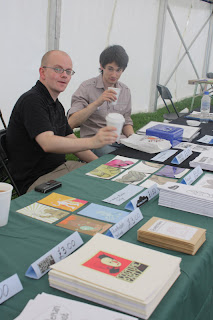 Last weekend was highly fun for the PJCC, what with the Sunderland Friendship Festival inviting group members Gary Bainbridge, Ben Clark, and Paul Thompson to host a stall in their Books Marquee.

You might be wondering, “Hang on, what’s my favourite North East based small press comics rag tag band of hangers on doing at that Kite Festival thing?”

Equally, you might not be wondering that, but let’s run with it anyway. The old Kite Festival’s now the Friendship Festival, basically a family orientated get together, with two music tents, activities for kids, poetry readings, fairground stuff, proper mint kites, and now, us lot.

We were asked to be a part of the Books Marquee and flog some comics alongside other North East publishers. We've wanted to find a new non-comics audience for a while now and this was an opportunity to do so. We made a canny few sales of the new anthology Robots… and that and the group’s numerous individual titles.

Our new best mate, Leonie O’Moore, was also there, organising highly enjoyable workshops for kids and adults, which went down really well. We had loads of chats with some interesting and talented people, and watched the kites in the sun.

Anyone up for coming next year?
Posted by Gary at 09:43