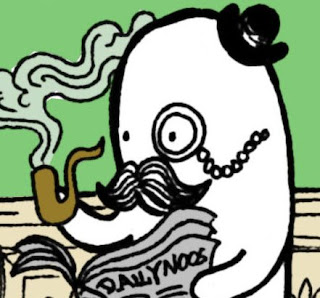 So, during a comics night a few weeks ago, I did a Gentleman Ghost strip, in honour of one of the greatest fictional characters of recent times. You can view it at Jack Fallow's lovely blog.
I've also got an old 24 minute comic posted up on the Paper Jam Comics Collective's collective blog.
I will, that is, in the future, be doing a ... something, but I'm not sure if I can say what it is yet, so I'll just abandon this sentence while it still sounds a bit mysterious.
This week, Gary has been reading Fluffy by Simone Lia. He described it as joyous.
Posted by Gary at 20:16