I haven't read a maaaaassive amount of these sorts of things this month, so let's crack on before it looks like I'm jumping on a bandwagon. Remember, I invented these in 1896, shortly after I patented the fake fact gag.
January set the ball rolling for the Paper Jam Comics Collective, we put on our most ambitious launch yet, with bands, cake and our fourth anthology, You Will Have To Wait ... and that, which contained a team up between my good self and Iain Milne, it was a chance to stretch a creative muscle and ushered in a year of various collaborations.
The PJCC capitalised on the successes after the launch with the forging of a new blog in the furnaces of the Internet. The digital age trembled at its sporadic updates. Jack Fallows and I celebrated by going to Edinburgh to sell our comics, we were looking forward to this, because this same city held host to a similar fair in 2008, sadly, this event was no comparison but we choked back the tears with Argentine tea, cracking wise with Mallard Small Press and reminding ourselves that February was considerably shorter than the other months so the terror would be over shortly.
Not a lot of note happened in March.
In April I discovered colour.
My bithday's in May so, I was celebrating all month so no posts. I must have been doing something all this time because... 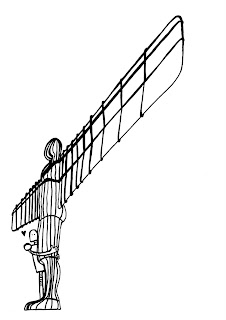 In June we launched Robots ... and that, this time at a new venue, the Star and Shadow Cinema. If the last antho and launch was a step up, this was a quantum leap. We even had Scott Bakula there to prove it. The awesomeness of the PJCC was made evident to me in all its glory with this book; I collaborated with Daniel Clifford, who I had only met a few weeks before, and with Andy Waugh, who I'd been stalking online for a number of years, but eventually met in the real world this year. It may not seem much, but to clarify, I have my own comics and artistic practice, it could be all too easy for me to not bother with collaboration and not to run the risk of working with someone I don't know. I've worked with people unsuccessfully in the past, and the only truly successful collab I've worked on up to this point was Nightbus with Chris. I've known Chris for forever, so working together is perfectly natural, working with someone I've known even for a number of months, is still a bit of a risk. But this year, it paid off. And it's continuing to. I'm even suggesting collaborations to other people, which is something I'd never dream of a few years ago.
July brought an opportunity to sell comics to a non-specific comics audience, something we've been wanting to do for a while, so we jumped at the chance. Me, Paul Thompson and Ben Clark repesented for the PJCC at Sunderland's Friendship Festival and won over some hearts and minds. Thanks to Leonie O'Moore for sorting this and other events out. I also exhibited some art work at the Mushroom Works in Newcastle, which was a fantastic chance to finish an idea I started at my Degree Show.
August was a month of inexplicable Nightbus buzz, which took the form of a radio interview on NE1 fm, a couple of reviews on blogs and a big up from Small Press Big Mouth, the bestest podcast in the world. The last couple of summers have been dedicated to working on Nightbus, but this year was our year off. The bizarre media attention and an impromptu visit to Chris' new gaff gave us the impetus to come up with an outline for Nightbus #3, which you should expect in 2010.
I got a new job in September so not many posts, but did have time to reacquaint myself with the supremely talented Dennis J Reinmueller and appear among the highly talented guest strippers on his webcomic Tumble & Fall. 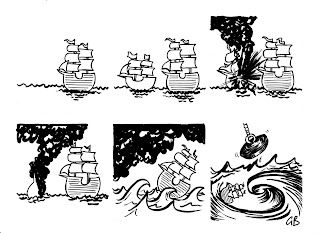 The PJCC launched their third antho of the year and sixth in total this October, Space Monkey is a kid friendly treasure trove of wonderfulness. Oh yes. My submission was another collaboration, more of a duel, perhaps, between me and Andy Waugh. I was also bigging up the group at Durham Book Fair, we didn't make many sales, but I did run an awesome workshop in spite of having the plague.
November was a busy month for me, work began in earnest for Show & Tell, a showcase of small press talent that would cross promote and essentially, show off, the work of a diverse range of artists. I started a Facebook competition for chums who wanted to be extras in my submission, a Nightbus short story. Thought Bubble came and was a roaring success, I launched my new comic/artists' book, Grainger Street, and met or caught up with a number of my small press chums and heroes, shout outs to Matt Sheret, Douglas Noble, the Banal Pig boys, Adam Cadwell, and Magda Boreyzsa.
December is still happening at the time of my writing this, but the only major event is the PJCC's residency, annexation, occupation, takeover, whatever you want to call it, of Dennis J Reinmueller's Tumble and Fall. My Christmas message is up there now.
So, 2009, was it worth doing?
Highs: The expansion of the Paper Jam Comics Collective into something resembling a Soviet-era war machine. Unarmed, poorly equipped and highly dangerous. The group allowed me to meet and hook up with awesome comics creators, and get fantastic results, I managed to step up my own game with my work.
Lows: Relatively disappointing sales at non-comics events, not so much of a problem when we were winning over hearts and minds, but a total wast of our time at the more disorganised events. Not as many of my own individual comics made as I would have liked, but swings and roundabouts, right? Also, still not finished reading War and Peace, but it's mint, so who cares?
Looking Forward to owt? Yeah, new anthologies: Adventure Arena, piloted by Daniel Clifford, Show & Tell, a group effort I've already mentioned, and the inevitable seventh ...and that which will demand your attention. 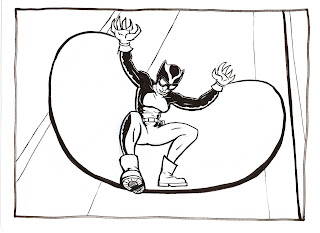 There's more: Old Collaborations - 2010 is the year me and Chris get Nightbus #3 into your mits! New Collaborations - I'm working on a superhero comic, of all things, with Daniel Clifford. It started off with a sketch, now we've planned a 24 part saga. New crazy experiment which is an anthology of sorts but it's not and there's even more collaboration involved - Martin Newman's Project Z, which involves me, Andy Waugh and Mike Thompson working on one chapter of a larger piece.
2010 should be a right laugh. May it bring you peace, prosperity and a shedload of mint comics. Many many thanks to all of you who've bought a comic, or decided to follow of the blog, especially if I haven't forced you into it.
Posted by Gary at 22:34

Hey Gary, good to hear how things are going. Have a good Christmas.

Forget all that - 2009 was truly the year our manlove blossomed, Gary.

Matt- cheers mate, hope you've had a mint one too!

Andy- I really don't know how to follow that. Er... Happy new year.

In a matter of days I will ACTUALLY have written some real stuff for our comic. Well, I say days but January is the month I finally get my act together.