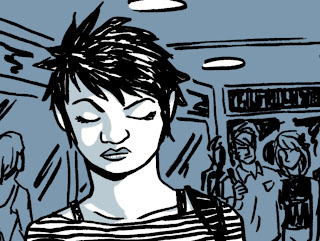 ...Or perhaps stuff I haven't mentioned in so long that it now seems new again. Daniel Clifford is captaining an all ages comics anthology and I'm involved. It's called A4 Comics Presents...


I mentioned this in my review of last year, so you should really be up to speed on this. Oh, it's like that is it?

Daniel's putting together an anthology that will aim to get young 'uns interested in comics. Sounds ambitious, but when you think about it, the only existing publication with the same aim is the Beano and that's never been good even through the veil of childhood nostalgia. Collecting a diverse range of stuff from this medium's multi-faceted genres and creators, it will be truly awe inspiring. I've got two strips in there, one of which is a superhero comic.

It's a genre I never set out to tackle. It's over exposed, overwrought, and frequently, it's everything that's wrong with the comics medium. But at the same time, it's a source of some of the best comics. It's the genre that got me into comics, and to not acknowledge that would be dishonest. Even Chris Ware does that. So bear in mind, that with every time I put pen to paper on this, I'll be agonising about all the pitfalls of the genre. All the clichés. All the repetition. Instead, there'll be an attempt to make the genre as exciting and mysterious for new readers as it was for me when I first picked up a superhero book. What's more encouraging is that Daniel is massively invested in this idea, he's convinced it'll be amazing, and after the anthology is out there, we'll be doing more with this character. She's called Sugar Glider by the way. Anyway, enough of this pondering. It'll be fantastic.

The anthology is still in the works, but there'll be updates on Daniel's blog and twitter. I'll post any images of note right here. Stick around.
Posted by Gary at 18:00

Daniel was giving me the lowdown on this project and it sounds excellent - a lot of potential there.

Of course, this potential was all in the amazing suggestions I gave him, so we'll have to see how it turns out!

PS - loving the artwork. Good use of a minimal colour scheme.

Cheers Andy, If you like that, the strip in the antho will have EVEN LESS COLOUR.

But I am considering limited palettes for when we do something more substantial.

You are rocking the blues in that sample pic - I wish I had the confidence to not put every colour under the sun into my illustrations.

Gary, your artwork is lovely. My favourite art at the moment. As in, of everyone. EVERYONE!

Become an Affiliate Publisher with Us!

I am Tom Jay and i would like to know if you are interested to
earn advertising money by serving mobile advertisement on your web site.

Mobgold is one of the largest mobile ad networks which have been working
with social network sites, content portals, iphone Apps developers or mobile
operators to help them increase their revenue by serving mobile
advertisement on their wap site, Apps or mobile internet channels in a very
rewarding way.

I liked your work, keep up Master.