Leeds Alternative Comics Fair Round Up

If you haven't seen the abundance of reports on the Leeds Alt Comics Fair, then this is no different. Except probably not as well written. 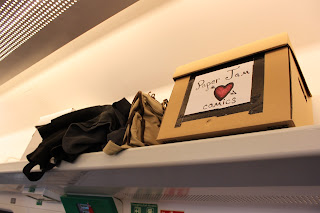 I took the train down from the Toon with my esteemed colleague and associate Mr Andrew Waugh, and we met up with the Newcastle Comics scene's benevolent estranged uncle, Ben Clark. 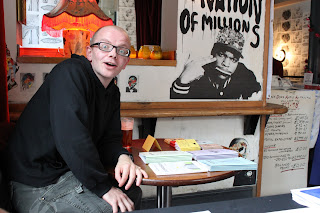 Here's Ben at 12:09, shortly after ordering the first pint of the day. Yeah, that's right, we were selling comics in a bar, and Nation of Shopkeepers was a truly welcoming host, with plenty of space for our wares and fine eats and drinks. I stuck with tea. Earl Grey. Hot. 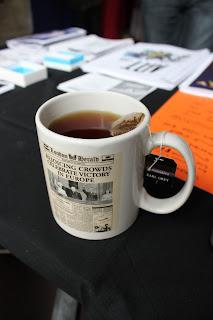 So good, I was mooved to have an udder. 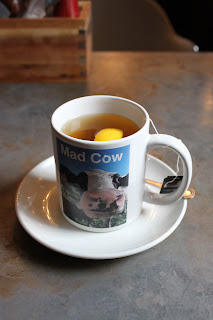 Our hosts were Hugh 'Shug' Raine and Steve Tillotson, who were kind enough to hand pick the creme de la small press. Andy, Ben and I were proper chuffed to be invited and showered Steve and Hugh with plaudits during the course of the afternoon. Here's Hugh directing punters to his stand. 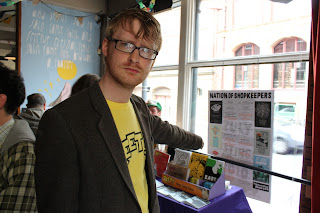 Our table was next to the highly talented Kristyna Baczynski who makes highly delightful comics, prints, illustratins and ephemera. I also had a chat with Manchester's comics Tsar, Adam Cadwell and the supercool Gareth Van Brookes, who's new comic had everyone in tears. Of joy. Presumably. 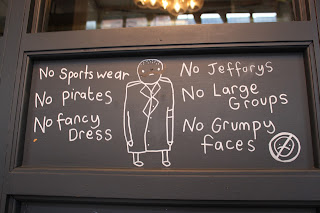 This was as perfect a comics fair as there can be, mint hosts, good crack from the punters, pleasant table neighbours, and we actually sold stuff at a small event. If anyone wants to know, the Paper Jam Comics Collective's latest anthology Art... and that was the most popular of our offerings. Thanks for keeping it small press, Leeds! See you at Thought Bubble.
Posted by Gary at 21:42