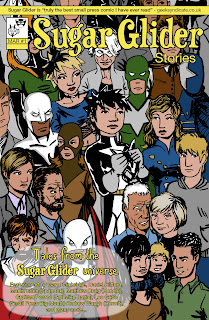 Sugar Glider Stories got its first review at Comic Buzz yesterday. It's a glowing review, here's a snippet:

"Strong, driven stories with vivid well drawn characters, there is some real talent working here, and they offer a fresh and exciting contrast to the mainstream."


The whole review can be read here.


Also this week, Comics Bulletin gave the main title, Sugar Glider #1 a rather pleasant review. Which can be read here.

I was rather chuffed with this line:

"Gary Bainbridge provides chunky, expressive linework reminiscent of something from Oni or one of those indie graphic novels about how awfully difficult it is to be middle class and have no real problems in life."


Some valid points are raised, but the overall potential of the character and stories we're telling seems to permeate through. Hurrah! Comics Bulletin also mentions SG's threads: "The costume itself is a strong design, combining a simple and effective black and white scheme with some realistic touches." It's the second time recently that people have complimented the Sugar Glider uniform, which is really encouraging! I'll expect you all in cosplay at the next comics fair.

Speaking of which, the 2nd Leeds Alternative Comics Fair in on this Saturday. Come see me and Andy and buy some comics and have a bit chat!

Also this week, the Paper Jam Comics Collective are officially launching their latest anthology, History ...And That, at Made in Newcastle via the medium of a group exhibition. I have three prints in the show which you can purchase for a mere pittance!


Also, we've been receiving a massive amount of Sugar Glider fan art, it's all online on the Facebook page. Go see! Now do your own, because we'll feature some of the best in Sugar Glider #2!
Posted by Gary at 22:51