It's a Process, Part II

Welcome back, and sorry for the delay. At the time of writing, I'm just over halfway through inking Sugar Glider #2. Progress is slow, but there are a lot of real world references and technical drawing in this one, and I want to make this book amazing. Not good, not ok, but amazing.

Here's part two of the process, the scanning. Let's start with all the kit. I scan with an old HP All-in-One I got during my uni days. Obviously, I use a Mac, equipped with Photoshop CS4 and a rather pleasant Wacom Bamboo tablet.
First up, here's what the scanned image looks like. I scan at 300dpi RGB, if you were wondering. You can see that the blue pencil lines are really light and dead easy to clean up. At this point, I'd desaturate the image (shift+cmd+U). 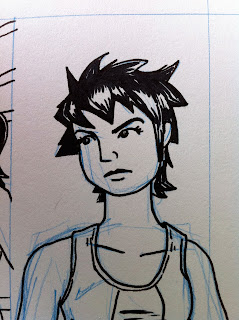 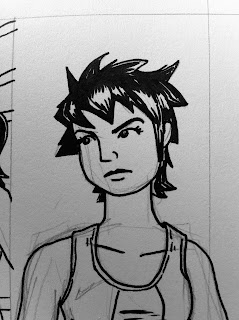 From here, all that needs to be done to get rid of the pencils lines is some simple adjustments, I've done loads of combinations of adjustments over the years, even running the whole thing through Illustrator, but the method I've settled on is a simple balancing act between Curves (cmd+M) and a Gaussian Blur (Filter>Blur>Gaussian Blur).
I use Curves to eliminate the mid greys of the desaturated pencil lines and to accentuate the black of the ink. This is achieved with what's called an 'S' curve, shown here. 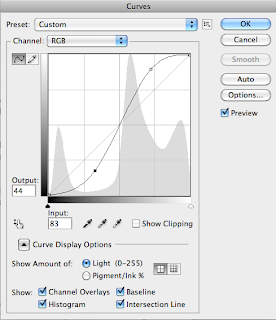 With this kind of image, you can afford to go even more extreme than this, but if you do, you run the risk of losing some subtleties of the line work, or accentuating some dust on the scanner or accidental inking. So it's always a good idea to keep checking the whole image, but you can add a really slight Gaussian Blur (I usually go between 0.6 and 1.2 pixels). This won't really affect your linework, but it will be enough to get rid of any dust or errors that are too numerous or small to remove with the Brush Tool (B). After that, I bring back the cleanness of the lines with another 'S' curve in Curves. If there are any errors after that, this is the only time I'd manually remove them with the Brush Tool. This demonstrates the use of the Wacom tablet, it really is a million times more accurate than a trackpad or mouse.
This is what the linework should look like now. 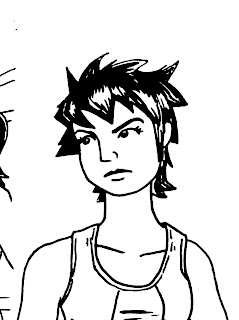 Then it's panel borders. I create a New Layer (shift+cmd+N), rename it “panel borders” and begin drawing some rectangles with the Shape Tool (U). I usually give these a colour so they can be distinguished from the white background. Then, in Layer Effects, I give the layer a Stroke. I can't remember exactly how many pixels, but it's less than ten and is consistent throughout the comic. 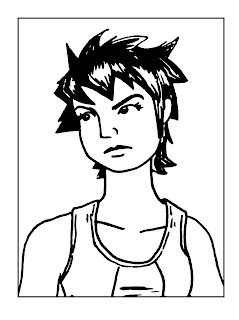 Then it's grey tones. I select with the Polyganal Lasso Tool (L). Sometimes I buddy it up with the Magic Wand Tool (W), but Lasso works best alone. He's a maverick. I have my grey tones set to an Action in Photoshop, but it's done in Levels (cmd+L), and I drag the output levels to 192, again, to keep the greys consistent. I reselect and repeat the action for darker greys. 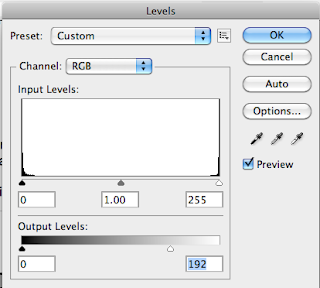 So there you have it. That's how I draw, ink and edit Sugar Glider. Any questions? Oh, right, the finished panel? Here it is... 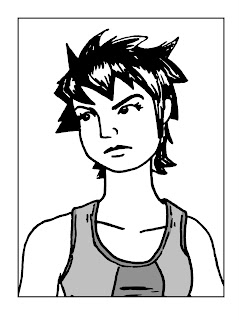 Hmmm... Susie looks somewhat peeved. Curious. Stick around for more SG2 progress reports!
EDIT
Since this post went live yesterday, I've had some input from other artists sharing their techniques and processes. That's one of the things I found really frustrating about Photoshop when I first learnt its ways: that there would be a million different ways to do one thing. Now I find it fascinating, because it's not a case of "here's the long way and here's the secret, correct way to do things"; far from it, it's simply what works for each artist. Both Terry Wiley and Jack Couvela suggested the following:
First start by "saturating" the image instead of desaturating, so that the pencil lines are even more blue. I guess you could do this any way you want again, Colour Balance, Hue/Saturation, etc. Then go into Channels and click on the Blue Channel. This makes the other Channels invisible and shows you the Blue Channel on its own. The black lines remain, and the blue pencil lines are now very nearly all Channel at the top of the Channels Palette, then Paste (cmd+V). This will give you your desaturated image, but this time, the pencil lines are removed for you.

Of course, you'll need to boost the contrast etc. from here, but it leaves all of the subtleties of the line that you run the risk of losing with blurs.
Thanks guys! If anybody else has suggestions, let's hear them in the comments, or however else you want to get in contact. Also, if any of you have used these techniques on my, or indeed our, recommendations.
Posted by Gary at 20:06

Labels: It's a Process, Sugar Glider, the Shop

As a moron when it comes to computers, my method for scanning magic blue pencil/black ink line art is just to scan it as b&w, picking whatever channel makes the blue disappear most, then tweaking the black/white sensitivity thing till it looks alright then accepting the scan (grainy black bits then get fixed with a median filter). Probably not the best way but pretty straightforward for duffers like myself!

1) Sugar Glider Two is awesome! I don't think I mentioned that to you or Daniel on the day. Splendid work, chaps.

2) I scan it at 1200dpi and use the Image > Adjustments > Threshold tool to make all my whites absolute white and all my blacks absolute black, before reducing it to 300dpi. That means I can easily pick all those black lines off the layer and put them on a layer above so I can add greys underneath them.

3) Photoshop is a ballache, a complex indivudual and a lovable rascal all at once. The only way to deal with it is to find something that works and keep doing it! Or steal some ideas from someone else...

Thanks gents, Photoshop is indeed a complex character. Really enjoyed what you guys have said on the matter. My digital process is much stronger for all these discussions.