I was going to call this post The Year of the Sugar Glider, but that seemed a bit conceited. Other things happened in 2011 aside from the runaway successes of SG, I just can't remember them. 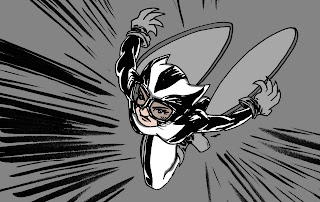 I won't labour the points too much, but the year kicked off with a deluge of positive reviews of Sugar Glider issue one, which had been released in the November of 2010. In 2011, SG1 was joined by three more Sugar Glider titles, Sugar Glider Stories 1 was launched at the 2nd Leeds Alternative Comics Fair and finally, we got round to doing a Newcastle based launch for SG2. A thousand thank-yous to Mike and the crew at Travelling Man Newcastle. Finally, Sugar Glider Stories 2 was released at Thought Bubble. All of the titles have received positive reviews and any of the niggles about yet another superhero comic have been ironed out by issue two. This isn't a superhero comic, it's a comic about a girl who happens to have an absurd extra-curricular pursuit. Oh, and there's superheroes.

Speaking of conventions, the last of the year was an absolute delight. More is written elsewhere about how awesome and essential the Canny Comic Con was, but from my perspective, it was great to be able to meet Sugar Glider fans who had followed the series from the start, and new fans who were intrigued by this new Geordie heroine. The day itself was so much fun and I can't wait for next year's event.

One of the most wonderful and humbling and joyous things about doing Sugar Glider has been the fan art. We received a boatload at the start of the year, and it's kept coming with each release. A lot of people have taken to Susie so much as to spend some time drawing her. I think that's the greatest compliment. If you've got any fan art, of Susie in or out of costume, or indeed any of the Sugar Glider cast, email it, post it on Twitter, or the Facebook fan page or send a carrier pigeon.

New Year's Resolutions? Well, the obvious one is to get Sugar Glider 3 out, thus completing the trilogy. This is a big one for me really as I haven't completed a series since I first got into comics. Having said that, issues one and two have been so special, it would be a crime to rush the conclusion. Expect SG 3 before the end of 2012.

Secondly, I'd like to get super organised for comics fairs, preparing an emergency comic con kit esssentially. The reason being, I make that promise every time we do an event and always forget something. Never again. Plus, I don't do a massive number of events, so it would be good to get through them sans stress.

And finally, sort out the website. Andy Waugh has been badgering me about this for aaaaages, and his new site is amazing. I'm jealous. I want one too. So there.