I made it one of my New Year's resolution this year to do at least one drawing every day. I firmly believe that if you don't use it, you lose it, so this is an attempt to keep practicing even if there isn't a major project going on. I started before Christmas, just to get into the swing of things, but also to build up some lieu days in the event that I miss a day in 2012. I'll post up a batch of them every week, or as near as I can to that. Maybe blogging every week should be next year's resolution.


Here's a first round of stuff that are mostly from either television shows my wife and I watch together, or imagination. 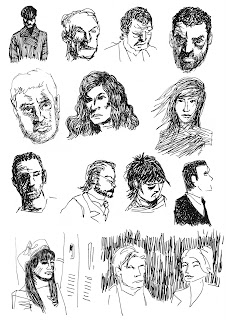 Oooh! that first image would look mint on a pot! Very body-stain/glaze printy. Good luck with your resolution kiddo.