Our third instalment of Draw Everyday is centred around Sherlock, which is an absolute joy. Moffat and Gatiss have done a bang up job of re-imagining the world's most iconic sleuth with a real affection for the source material. This is how adaptations should be done, not with direct transcriptions from page to screen, nor with an unrecognisable disasters linked only to the originals by a title or character. Sherlock, and other successful adaptations, take the characters, the themes, the nuances, the set pieces, and does something unique, yet intrinsically linked to the starting point.

Anyway, enough of that, there's some stuff in here from Sherlock - see if you can guess which ones I drew while the show was paused - some stuff from imagination, one from a Christmas film I forgot to put on an earlier one of these, my wife, our new external hard drive and Jean Dujardin, who plays the lead in The Artist, which is a delight from start to finish. As you may have assumed, these are all from December and January. 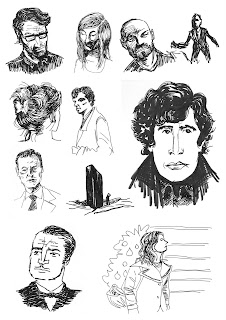