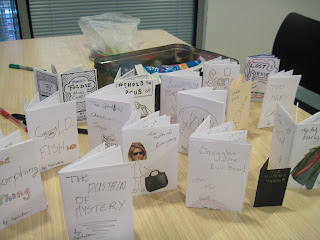 We love Newcastle City Library. Largely because it's a place where you can get books and comics and that for free. But also because they let a bunch of like minded comics creators put on the first comics convention in Newcastle in sixteen years. A few of the people behind the Canny Comic Con are getting their comics on again and holding another event at the City Library. 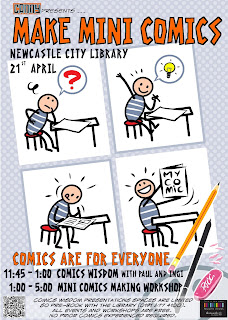 This Saturday, Make Mini Comics day is happening. It's a day of comics making, starting off with a bit of theory in the form of a couple of talks from Paul Thompson and Ingi Jensson (who did the poster above). The two will no doubt have some gems of inspiration to get the creative juices flowing in time for the mini comics making workshops, which I assume are being lead by Cuttlefish. You can make your own comics on any theme you like, a song, a shopping list, a funny story, a half-heard conversation, the end of the world, a chance meeting or just a bunch of words and pictures.

Hey Gary - just came across your blog. Looks like you're still putting together some really great stuff - good work!

Thanks Tom, great to hear from you again. Hope you're doing well.