Ok, so I can imagine you're excited about Nightbus 3 coming out, so here's the reveal of the other silhouette image I posted a while ago. 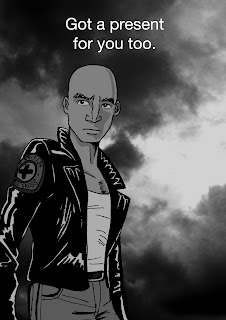 Some of you might be wondering what stage I'm up to, and at the time of writing this, I've just scanned all of the pages and set out the pages. Next it's the black and grey tones, followed by tidying up the lettering and all those tedious finishing touches. The plus side is, you guys get preview images soon! That'll probably show up first via my Twitter and Instagram.

If you're a fan of my work via Sugar Glider, you may not know anything about Nightbus. Nightbus is a collaboration between myself and writer Chris Jones. It began in 2007, with the release of this two-page comic for free in numerous locations around Newcastle and of course, on this very site. It introduced the world to the pair who run Newcastle Student Safety Bus, Conrad and César, and the events they uncover after dark. Three more free snapshots followed before they were collected with extra material in 2008 to create Nightbus 1 which was released simultaneously at the UK Web and Mini Comics Thing and the Newcastle branch of Travelling Man. 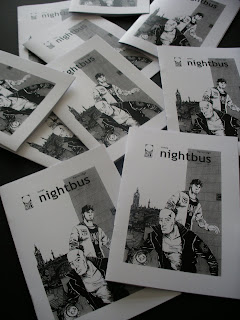 Later in 2008, we released a new snapshot, setting up a longer story for Nightbus 2, which was in turn released at Travelling Man that October. The second comic introduced new characters, notably the Northumbria Police detectives Greene and Kilbane. 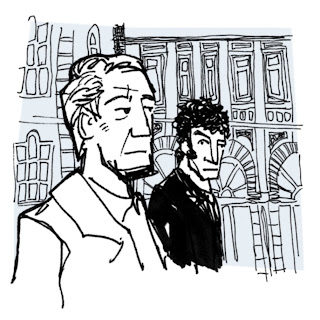 Nightbus always sold reasonably well and gathered a small but passionate following, a year after issue two came out, there was an unexpected surge in popularity for the comic, we made lots of sales, had lots of positive reviews, I was interviewed on local radio and the real people behind the real Nightbus got in touch to commission me for a bespoke strip. Really, that's when we should have dropped issue three, but 2009 was a busy year, the Paper Jam Comics Collective was making huge steps with the quality of the anthologies and launch parties, and of course, that is the year that Sugar Glider was created. She took up the vast majority of my comics time from there. I certainly won't make the same mistake with SG, that trilogy will be concluded as soon as I've dealt with this one!

In 2010, Andy Waugh and I released Show & Tell, a comic that showcased both of our work. I put a new Nightbus strip in Show & Tell, but perhaps because it was out of context, reviews weren't as positive. So here we are, a new Nightbus for a new generations on the horizon. You may want to catch up on the events of issues 1, 2 and the strip from Show & Tell. All of which are available in the Shop for next to nowt.
Posted by Gary at 12:00