Having been to Paris twice in the past twelve months, I think it's high time I share some of its secrets. Namely, the comics shops.

Paris is one of my favourite places in the world. I'm sure most of the reasons I love it are the same as most people, and as a result, you can read about the Eiffel Tower and the Louvre elsewhere on the Internet. I'll not retread those footsteps.

Europe, and specifically France and Belgium, are renowned in the comics world as some kind of cultural Mecca for comics creators and readers. The truth is, while you're not exactly tripping over people reading comics in the Parisian boulevards, no-one's spitting on the people reading comics in the Parisian boulevards. So, every time I'm in Paris, it's time to go find some Bandes Désinées.

The Internet isn't overflowing with guides to the Paris comics scene, and some sites of the individual shops are better than others, so to rectify this, here's my attempt at a guide to Parisian comics shops, or the BDSphère as I like to call it. I'm sure you'll forgive me that it's incomplete, anyone up for a trip to Paris?

Let's start at the Comics Quarter.

Located in the heart of the city, a short walk from one of the city's major sites, Notre Dame, the Comics Quarter is located within the slightly larger Latin Quarter around La Sorbonne. Go to the cross roads between the Boulevard Saint-Jacques and Boulevard Saint-Germain. You could also get the metro to Cluny-La Sorbonne and exit at those two streets.

Directly opposite each other on the crossroads are two, yes two, branches of Album. The first is largely French new releases and Tintin. You can pick up albums in French, a few of the major titles in English too, merchandise and prints. Last year I picked up an anthology of prize winners at the Angoulême festival. I've also seen comics from British publisher NoBrow in this branch. The Album over the road is a mix of mainstream American comics, sic-fi merch and art books and sketchbooks, some of which were signed. I was tempted by the two volume guide to all of the Invader mosaics in Paris, but put it back due to its mighty weight.

This little side street comes off from the crossroads and houses loads of smaller comics shops. Pulp's Comics is mainly American superhero comics, t-shirts and lots of figures.

Aapoum Baapoum gives the impression fo having second hand wares, but there's a great selection of superstars of French BDs. It's all laid out in a really practical way, like vinyl in in trays in an independent record shop. I could easily lay my hands on Hergé, Moebius, Trondheim, Blaine, Pratt, Sfar, Delisle and any others you could mention. Closer inspection revealed that the comics were actually stored in old wine boxes. Only in France. The chap who ran the place was very jolly and helpful too. A class act all round.

Little Tokyo is tiny, but rammed full of stock to satisfy just about all of your Manga and Anime needs. There's a good proportion of Studio Ghibli merch here, some of which I'd never seen elsewhere. Next door there's a shop that feels like a gallery crossed with a trendy design shop, but has a relatively small stock (given the space) of art books and sketchbooks. I think they might have a more impressive range compared to the equivalent section in the second Album shop, but be aware that some of the same books are a couple of Euros more expensive here. 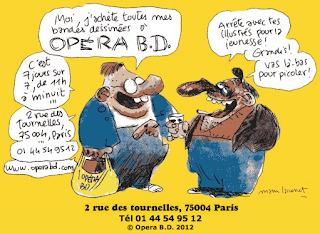 This is possibly my favourite BD shop in Paris. On a practical level, it's very close to where we like to stay in the lively Bastille neighbourhood. Secondly it's open from 11-midnight, so you could go out for dinner and do some late night comics buying afterwards. Which is what we did. This shop has new releases, more French superstars and comics aimed at kids. Again, a very lovely atmosphere and a pleasant host as well. I picked up the first Corto Maltese book by Hugo Pratt here, I've never read the series, but I've liked the artwork and rarely seen the books in the UK. Reading in French has the odd effect of slowing the pace down, and giving a massive sense of achievement after every page that's traversed with minimal or no assistance from Google Translate.

This shop is like a Tardis, it appears quite modest on the outside but just keeps getting bigger. As you'd expect, a rather large selection of Manga, Anime and merch. There was a whole stand of J-Pop CDs too. The staff were really helpful, in spite of my French. 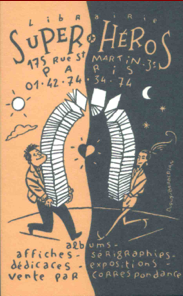 This was on the list because this is the comics shop that features in Lewis Trondheim's Approximate Continuum Comics. In the scene, there is a book launch at the shop, Trondheim gets blind drunk and makes a fool of himself outside. Again, largely French stuff from the super héros of the medium, some kid's books, some signed books and some rather lovely prints make this another delight. There's a Jacques Tardi drawing on the wall outside too, so you know you're nearly there. It's not too far away from the Pompidou Centre, whose shop should also have a mention for having an impressive BD section. 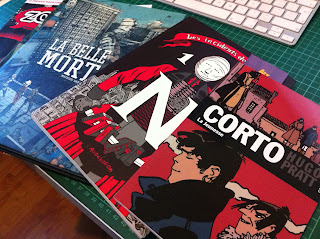 So there you are, my latest trip to Paris from the point of view of the comics shops. That's not all of them by the way, so if anyone wants a more comprehensive guide to the City of Light's BDeries, then let's have a whip round. I'll do a good job of it, with maps and drawings. Maybe even interviews.
Posted by Gary at 19:48