Before I worked with Daniel on That Cool Robot, I collaborated with Paper Jam Comics Collective member Iain Milne. This first of these was called The Wolf Wrestler and appeared in You will Have To Wait... And That. 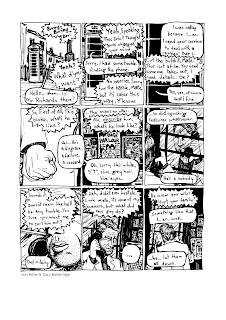 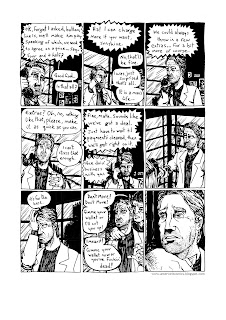 The script went through a number of changes, and Iain was always open to changes and suggestions, it was great working with him, with the trust that I could tell a very visually static story in my own way. At the time I was reading a lot of Brian Michael Bendis comics. I loved the way he got a character telling a story to camera or a talking heads conversation look so visually interesting, regardless of whether he was drawing the scene or entrusting the art to someone else. I wanted to have a go at that. I'm not sure if every panel is successful, but the challenge was a lot of fun.

The intention we had was for the guy making the phone call to be calling in a hit on himself. He considered himself such a failure, to his wife, family, everyone, but we never go into why. We do know that he can't bring himself to kill himself, at least not directly, so he hires someone else to do the job. The twist is in the end with the mugger threatening him with his stanley knife. Does he save him the bother? Or is this confrontation with death for real enough to turn his life around?

I'm not sure it's entirely clear that the guy in the phonebox is hiring the hitman to target himself. I think people reading it at a glance may assume that the target is a third man, but to be honest, the comic reads well either way, with the conclusion still having a bit of poetic injustice to it.