Here's another Collaboration from the Belle Epoque of the Paper Jam Comics Collective. This was once again with writer Iain Milne, and was based on a fantastic idea from writer Iain Milne. After we spoke about it, I ran with the concept and adapted it into what you see before you. 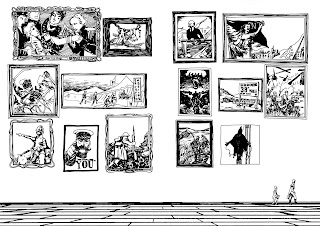 This was destined for the centre pages of History... And That, so I wanted to try something a little different. Well, maybe not that different in hindsight, but there was a sense of responsibility attached to drawing the centre pages, especially when it's specifically designated, rather than just left to the cruel justice of the page order. I'm not sure if the idea of the paintings telling a story like a comics page really comes across, but to be honest, it's secondary to the flavour of the illustration as a whole. We had a line of dialogue at the end, but I removed it in the final cut, as the 'paintings' seem to say it all.
Posted by Gary at 12:00

Labels: And That, History ...And That, Paper Jam Comics, Pre-emptive Nostalgia